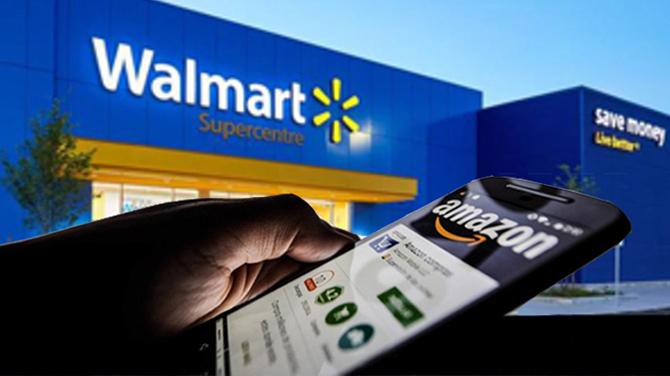 Traditional traders and local players rejoiced Thursday at new e-commerce rules imposed by the Indian government on global giants such as Amazon and Walmart which analysts said could force them to rethink their Indian operations.

Under the surprise restrictions, e-commerce companies are banned from selling products from firms in which they have a stake. They are also forbidden from entering into exclusive deals with sellers.

The rules, which come into force on February 1, will particularly hit Amazon, which has invested billions of dollars in its India operation, and Flipkart, which was taken over this year by another US giant, Walmart.

The government acted in response to complaints from brick and mortar retailers that e-commerce giants were unfairly selling products at discount prices.

Amazon and Walmart, which in May bought a 77 percent stake in Indian company Flipkart for $16 billion, will be worst hit by the new rules. Neither has made a public reaction.

Snapdeal, one of India’s biggest Internet shopping sites, said the changes would enable a level playing field for all sellers.

“Marketplaces are meant for genuine, independent sellers, many of whom are MSMEs (Micro, small and medium enterprises),” Snapdeal founder Kunal Bahl said on Twitter.

The Confederation of All India Traders (CAIT) said the new policy would end discounting wars between e-retailers.

It would also check big companies from using “the policy of exclusivity, predatory pricing and deep discounting” to their advantage, CAIT secretary Praveen Khandelwal told AFP.

The new rules will start on February 1 when the nationalist government of Prime Minister Narendra Modi announces its interim budget ahead of a general election due by May.

Analysts said the rule would have a major impact on the business models built up over the the last five years by the US giants as they make inroads in India’s growing market.

“Amazon, Walmart and other players with their India investments will have to rethink their business strategies,” Satish Meena from Forrester Research told AFP.

“Consumers will face the brunt and prices will go up while available options will go down.”

The Indian government has in the past two years sought to strengthen home-grown enterprises against foreign competition.

It has told credit card companies such as Visa, American Express and Mastercard that all information on Indians must be stored on India-based computers.

The government has also proposed limits on what internet giants can do with personal data.

It recently proposed that the WhatsApp messaging app break its trademark encryption which guarantees private communications between users. The Facebook-owned firm has fiercely resisted the calls.

←China’s Tencent, KKR seal $175 million investment in Voyager How to Start Your Own E-Commerce Business in the Philippines→